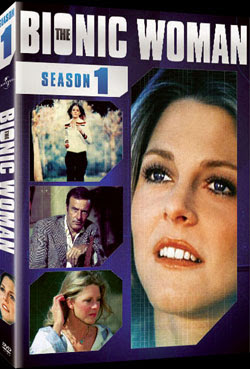 According to the site: "Fans immediately complained about the cover design, noting that two of the smaller pictures (the "helicopter" and "running" images) were from the third season; it felt inappropriate for them to be on the first season box. Fans also noted that the large picture of Jaime Sommers seemed a bit too serious-looking, as well. TVShowsOnDVD passed this fan feedback along to Universal immediately, and the studio pulled the packaging graphics from distribution before the day was over."

You can read the complete article (detailing the changes to the artwork) and view the DVD menu screens here.
Posted by Christopher Mills at 5:53 PM