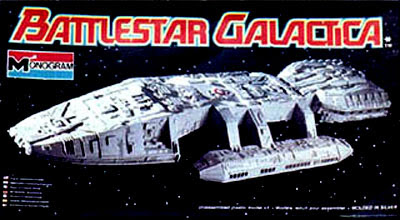 I spent an awful lot of time in the 70s building model kits of spaceships. I know for a fact that I had the Star Trek Enterprise (although I could never get the nacelle pylons to stay up), Klingon Battlecruiser, 2001 PAN-AM space plane, Star Wars Millennium Falcon, X-Wing and Darth Vader's TIE Fighter kits, the Space: 1999 Eagle and Hawk, the Buck Rogers Starfighter and Draconian Fighter, a couple of Message From Space kits, and the Battlestar Galactica, Viper, Cylon Raider and Cylon Basestar.

About half of these models ended up getting destroyed through overenthusiastic play or adolescent bouts of random destructiveness (I remember I blew up my Millennium Falcon with firecrackers for no good reason that I can recall, much to my later regret), but I'm pretty sure that a bunch of them are stored somewhere in a box in my parents' basement. One of these days, I'm going to have to go and try and find them so I can post photos of my built-up kits here on the site.

By the time the Galactica kits came around, I was pretty good at assembling the models, but I was still horrible at painting them, and those wet-transfer decals were the bane of my existence. Since they would invariably tear when I tried applying them, I decided to try and make the damaged decals work for the kit, and would try to disguise them as battle damage. This illusion was enhanced (I thought) by taking a cigarette lighter and lightly scorching the plastic of the models to suggest laser burns. It actually worked pretty well, except when I would get overzealous and accidentally set the plastic on fire, creating nasty plumes of toxic styrene smoke.

I think the Monogram Battlestar Galactica kits were my favorites. I just loved the designs (and still do), and those particular models came out pretty decent. Sure the Galactica model was sadly under-detailed, but I really enjoyed pitting it against the Basestar in a battle of dreadnauts.

The ones I really wish I still had, though, are the MPC 1999 Eagle and Hawk. I absolutely adore those ships. Someday maybe I'll track down those kits again when I can afford them.....
Posted by Christopher Mills at 3:49 PM