I've made no secret of my affection for the first season of Buck Rogers in the 25th Century. Like the "Silver Age" and "Bronze Age" superhero comics I grew up with and still love, it was a show about adventure, humor, glamor and heroism. One thing it wasn't was subtle. But you, know, I like that. One of my favorite episodes from that first season - perhaps my very favorite - is "Return of the Fighting 69th." 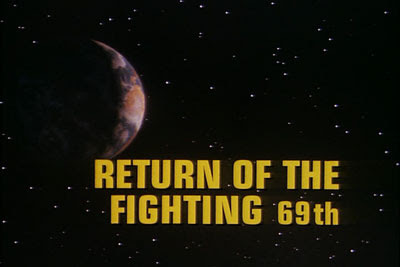 I actually started writing a detailed synopsis of the episode, but after about an hour and half spent recounting roughly the first ten minutes of the show, I realized that I was being stupid. Not only is the show on DVD (and I bet most readers of this blog have the set) but it can be watched on Hulu by anyone who's not familiar with it or can't remember it from when it aired in the autumn of '79. 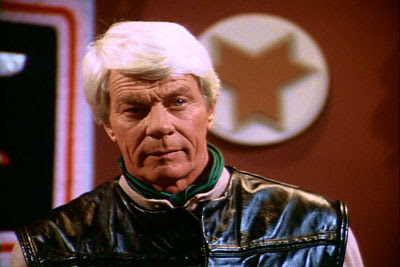 Suffice to say, this is the episode where a bunch of "over-the-hill" space marines are recruited for one last mission - a strike on the base of galactic gunrunners Corliss (Robert Quarry of Count Yorga, Vampire) and his partner/lover Roxanne Trent (Elizabeth Allen), which is hidden the heart of a nigh-impenetrable asteroid field. These veterans - the titular "Fighting 69th," are led by Noah Cooper (Mission: Impossible's Peter Graves), Wilma's old flight instructor and family friend. 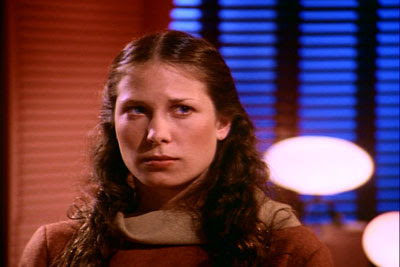 This is an interesting episode to me for a lot of reasons. For one thing, we get a nice anti-ageism message and a sympathetic supporting character who is a deaf-mute (deaf actress Katherine Wiberg - pictured above - in her only TV or film role). For another, we're given tantalizing little glimpses into Wilma's past. It's stated that her father flew with the 69th when she was a child. Clearly her father (never mentioned before or again) was not only a military pilot, but died while she was young, and Cooper became something of a surrogate father figure to her. This explains a lot about her character (at least as portrayed in these early episodes) and gives Erin Gray some genuinely human emotions to express. 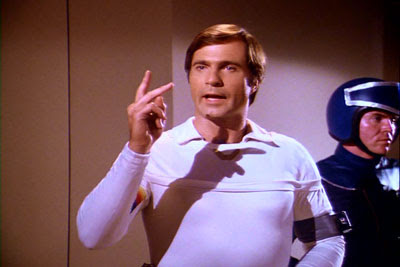 We also get another brief glimpse into Buck's history when we find out that back in the 20th Century, Buck dated a teacher who worked with the deaf, and who taught him sign language. Is there nothing this man cannot do? 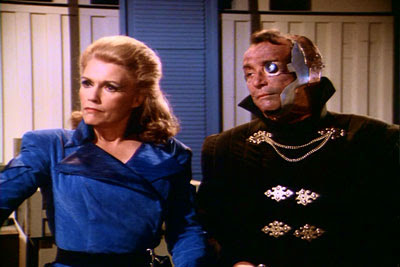 The episode's villains, Corliss and Trent, are fascinating, as well. In a previous encounter with Colonel Deering, they were trapped in a burning spaceship where Corliss was severely disfigured and lost an eye. Trent lost a hand to the flames, pulling him to safety, and their status as interstellar fugitives prevented them from getting top-flight medical care, condemning them to clunky metal prostheses and grotesque scarring. Their plot to destroy Earth's population with some stolen 20th Century nerve gas is driven by pure, unbridled revenge. What's particularly interesting to me is that they genuinely seem to love each other. Sure, they're horrible, mercenary criminals, but they are capable of love - if only for each other. 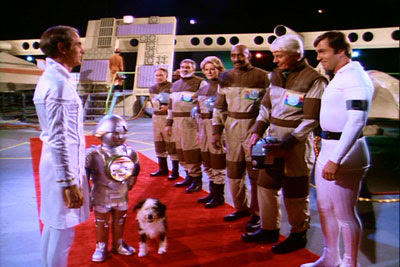 Another thing I like about this episode are the great guest stars, something that Buck Rogers, in its first season, really excelled at. Aside from the late, great Peter Graves and B-movie heavy Quarry, we get the legendary Woody Strode as one of the 69th's pilots. This guy's film career goes all the way back to 1939 and he's worked with directors like John Ford and Stanley Kubrick. He isn't given a lot to do in the episode except look imposing, but it's just so cool to see him in a space suit.

I also have to mention the 69th's mascot, a mutt named "Lucky." In an article that story editor Alan Brennert wrote for Starlog magazine back in 1980, he discussed this episode at some length. Apparently the writers were getting a bit punchy and were extremely amused with how loaded this particular script was with "schmaltz" - a deaf-mute slave girl rescued and reunited with her family by Buck, the whole Wilma-Cooper soap opera etc. - and started joking about how all the episode needed now was a puppy. The story goes that they then received a phone call from the network demanding that they find a place in the episode for a dog. It turns out that the pooch had been rescued by and showcased in The National Enquirer, and the network figured that if they gave the canine a role on the show, they'd get tons of publicity in the tabloid. At first, the writers were convinced it was a joke, but no - the dog was written into the script. 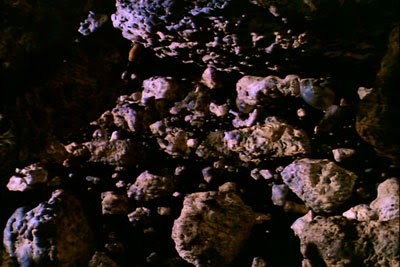 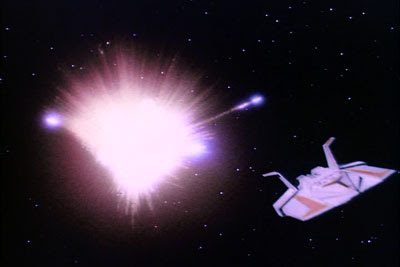 There's a lot of new Hartland effects shots in "Return," beginning with the Nacrosis asteroid belt itself. It's not as kinetic and interesting as the asteroid field in The Empire Strikes Back, but it's effective enough for Buck Rogers. There are at least three space dogfights featuring "Scorpion" fighters (first seen in "Planet of the Slave Girls") and "cargo sleds" equipped with tail guns. There's also the miniature of Corliss & Trent's base itself, built into a large asteroid. 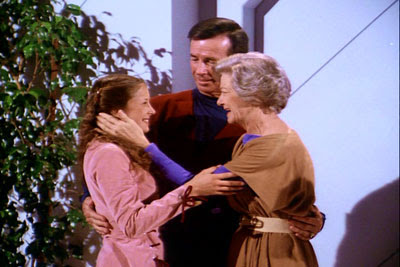 I've always loved this episode, with its classic adventure plot and interesting characters. I even like the so-called "schmaltz" (though I'd prefer to think of it as "heart") - when Cooper and his crew are presumed dead for a while at the end of the episode, I always choke up a little. And when Alicia is reunited with her family in the tag, it's a genuinely emotional - if somewhat thrown away - scene. But even more than those elements, I just love particular moments. For example, when Roxanne Trent meets Buck, she offers him her metal hand with the expectation of revolting or threatening him, but he takes it in his own and places a gentlemanly kiss on her copper-plated wrist. That's cool. 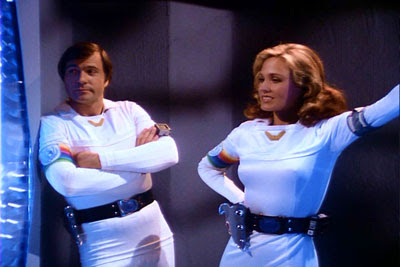 I also like Wilma's enthusiastic flirting with the guards when she and Buck are thrown into a holding cell on Corliss' base. The comic sequence is extremely broad and campy, but it's funny, too - and Gray looks astoundingly sexy in the scene.

There's also a surprisingly grim and effective scene between Dr. Huer and Dr. Theopolis when they believe that the mission has failed and Buck & Wilma are dead. Their discussion about their options is bleak and somewhat frightening. Apparently there's an "Omega complex" somewhere underground that can hold a limited number of people (specifically, Earth's leadership), and it falls to Huer and Theopolis to choose who will be permitted to survive. Considering that one of the participants in the scene is a plastic prop with flashing lights, it's a remarkably effective and moving sequence. 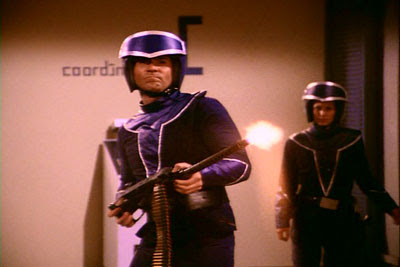 But my absolute favorite moment is when Buck grabs an old machine gun off a pile of 20th Century munitions and threatens Corliss with it. "That's just an ancient signaling device," Corliss insists. Buck fires a few hundred rounds into the floor: "Get the message?"

So - solid military mission-adventure plot, interesting villains and charismatic guest stars, lots of outer space action, some emotion and Buck Rogers with a machine gun. In my book, that adds up to a hell of a great hour of TV space opera, and I never tire of rewatching it.