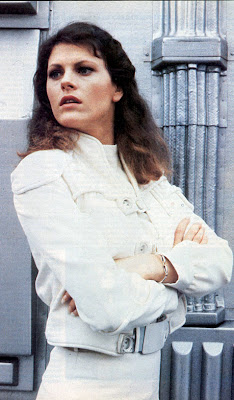 The lovely Robyn Douglass as Jaime Hamilton on Galactica 1980. The show may not have been all that good (okay, it was awful) but I always felt that the cast gave it their best shot, despite some of the worst scripts ever written for a science fiction series and an extremely rushed production schedule. In particular, I thought that Douglass really manged to bring some humanity, humor and intelligence to her role as the "ballsy" girl reporter who was virtually the only person on Earth aware of the existence of the battlestar Galactica and its crew.

A beautiful brunette model - and I've always had a particular attraction to beautiful brunettes - Douglass also appeared in a 1979 TV movie called The Clone Master and guest starred on various television show in the 80s, including some Mike Hammers. According to the IMDb, she now helps run a bed & breakfast in California.
Posted by Christopher Mills at 12:00 AM