If you go by sheer volume, then Alan Dean Foster was probably my favorite author when I was growing up (from say, ages 11 to 17). Sure, I read the works of Heinlein, Clarke, Bradbury, Burroughs (Edgar Rice, not William) and dozens of other science fiction scribes, but it was Foster - and his novelizations of the movies and television shows that I loved - that I probably read the most. In those ancient, pre-cable, pre-home video days, novelizations were the only way to re-experience those adventures, and Foster was the novelization man.

Oh, I had all the James Blish Star Trek adaptations, and dug 'em, but Foster's volumes based on the animated version of the show were more rewarding. Instead of taking hour-long scripts and turning them into short stories, as Blish was doing, Foster took half-hour scripts and expanded them into novellas... and eventually, full-length novels. And he nailed those characters and their voices, too, bringing them to life on the printed page more vividly than the talented but workmanlike (at least on Trek) Blish. 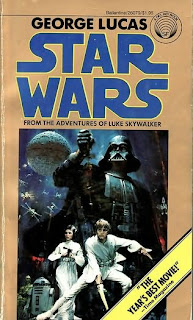 And then there was Star Wars. The book was credited to George Lucas, but we all know now that Foster also penned the Star Wars novelization, and maybe that's why it was so compulsively re-readable.

I wore out at least three paperback copies of that thing (the photo section in the middle kept falling out), and when Foster's original Star Wars novel, Splinter of the Mind's Eye - the first authorized continuation outside of the Marvel comics - was released, it was a huge deal. I bought that book as soon as it was available, and friggin' devoured it. I don't know how many times I read that story as a kid, marveling at the very existence of a new Luke Skywalker adventure (remember when the franchise was "The Adventures of Luke Skywalker?").

I was too young for the R-rated movie, but his novel of Alien gripped my teenage mind and squeezed it in a sharp-clawed grip. I didn't actually see Ridley Scott's film until a few years later on VHS, and I thought then that the book was scarier - though I've come to appreciate the movie since. I remember when Aliens was released in '86 how college-aged me - and several of my geekier friends - were actually almost more excited about getting Foster's tie-in novel than we were about seeing the movie!

The Black Hole, Dark Star, Outland... great adaptations all, and these books eventually led me to his original science fiction works, like the Humanx Commonwealth stories and the Icerigger trilogy. I haven't read everything he's written in the past thirty years (the man's been too damned prolific), but I do take some pride in the fact that I introduced my nephew to Foster's Flinx & Pip series several years ago, and he's still a rabid fan of the author.

Hmmm... I think I need to dig through some boxes and pull out some of these books. I'm thinking it'll be a lot of fun to re-read some of those old classics on these hot Summer weekend afternoons....