THE DAY AFTER TOMORROW: INTO INFINITY (1975) 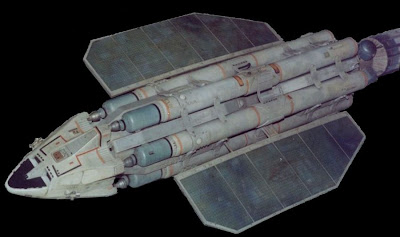 Into Infinity was a television movie produced by Gerry Anderson between seasons of Space: 1999. It starred Nick Tate and was written and directed by 1999 veterans Johnny Byrne and Charles Crichton, respectively. The effects were handled by Brian Johnson and the 1999 team.

The story chronicled the flight of the Earth spaceship Altares, which was crewed by two families (including children) and was capable of traveling at the speed of light courtesy of its unique photon drive. At the climax, the Altares passes through a black hole to an uncertain - and unrevealed - fate.

The film - sometimes described as a pilot for an unsold series - aired in the U.S. as part of the NBC Special Treat series of irregularly scheduled educational specials, and was designed to dramatize Einstein's theory of relativity for young viewers. I remember watching it when it originally aired and my ten year-old self was utterly fascinated by it, probably because of the excellent miniature work and special effects (evident in the clip below).

It's one of a number of genre obscurities I remember from my childhood that I'd like to see again, but I don't believe it has ever been released on video or even re-run.

ADDENDUM: I have been informed that Into Infinity is available on DVD - exclusively from Fanderson: The Gerry Anderson Appreciation Society, paired with pilot for the producer's 90s series, Space Precinct. The disc appears to be Region 0, so if you live in the States and can afford the shipping, it should play on NTSC/R1 players.
Posted by Christopher Mills at 3:55 AM

Email ThisBlogThis!Share to TwitterShare to FacebookShare to Pinterest
Labels: 1975, Into Infinity, TV