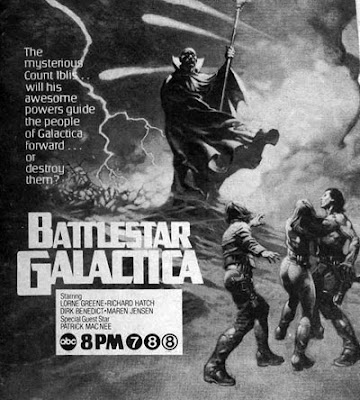 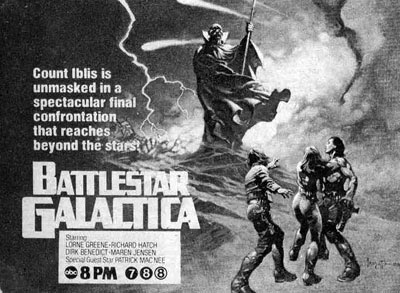 Back in the early days of this blog, I posted an article about the paintings that the late, great fantasy artist Frank Frazetta painted for ABC/Universal to promote the original Battlestar Galactica series in TV Guide magazine back in 1978. I had forgotten, though, that along with his paintings for "Saga of a Star World" (pilot), and "Lost Planet of the Gods" Parts I & II, he also contributed another dramatic painting for the mid-season two-parter, "War of the Gods," which guest starred the great Patrick MacNee as the diabolical Count Iblis. (Of course, as all good Galacticans already know, Macnee also provided the opening narration and the voice of the Imperious Leader for the series, as well.)

It appears that Frazetta may have actually seen a few episodes by the time he painted this later piece, as the costuming is closer to the actual Colonial uniforms seen on the show. Of course, his Iblis looks more like an evil wizard off a sword & sorcery paperback cover, but there's no denying the stratospherically high coolness factor of the piece.
Posted by Christopher Mills at 3:19 AM