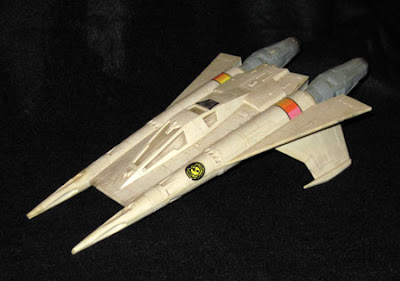 As promised, here are snaps of some of the classic 1970s spaceship models I built as a teenager. I thought I'd spread 'em out over multiple posts and showcase them by series. Today, obviously, is Buck Rogers in the 25th Century day. This built-up Monogram "Starfighter" has held-up fairly well - I only had to re-attach one of the engines, which had fallen off. It still looks pretty good, too. Somehow, I managed to get the decals applied successfully, and it also helped that this particular ship required a minimum of painting - although I probably should have done some detailing on the cockpit interior. I know that the Hartland SFX guys called this ship the "Thunder Fighter," but I don't recall it ever being called anything but a "Starfighter" on the show.... 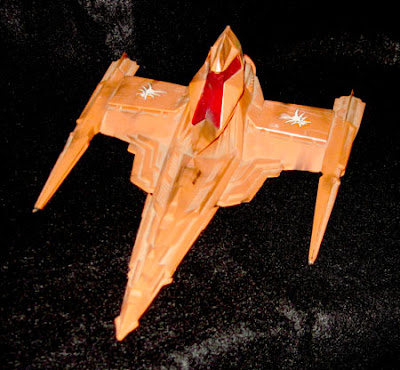 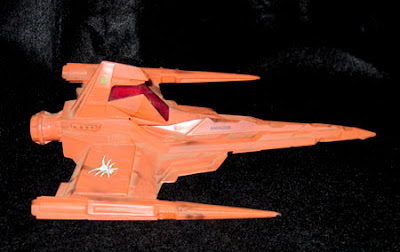 Of all of my old models, it appears that the Monogram "Marauder" has actually held up the best. No broken parts, all of the decals are intact and pretty much perfectly placed - hell, for some reason, it was even less dusty than the others. I always liked this Draconian ship (sometimes called a "Hatchet Fighter" on the show), with its odd lines and oversized cockpit. It doesn't look very realistic (there really doesn't seem to be much space for the engine, fuel, etc.), but it sure does look cool.

More photos to come.
Posted by Christopher Mills at 9:38 PM