SPACEHUNTER: ADVENTURES IN THE FORBIDDEN ZONE (1983) 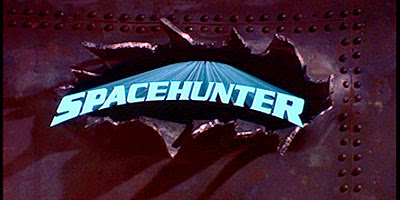 In the Summer of 1983, I had just graduated High School. Okay, technically, I'd dropped out because a single foreign language requirement had threatened to hold me back, but I'd taken and passed my G.E.D. with flying colors and had already been accepted to art school, so let's just say I'd graduated. It's simpler that way. Anyway, I'd already seen Return of the Jedi and had been quite disappointed in it since Han Solo and Darth Vader had been seriously de-balled and the whole Ewok thing just aggravated me.... among other let downs and cop-outs in the script (brother and sister? Really?). So, when my girlfriend and I decided to hit a Saturday matinee, and I saw Spacehunter in 3-D on the marquee, I was hoping for something with a bit more testosterone than Lucas' latest interstellar epic. 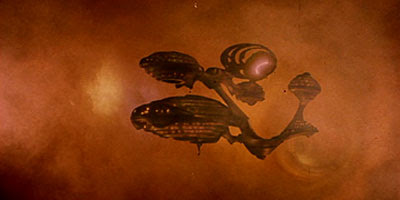 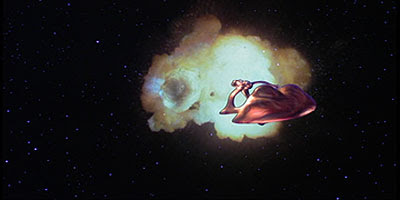 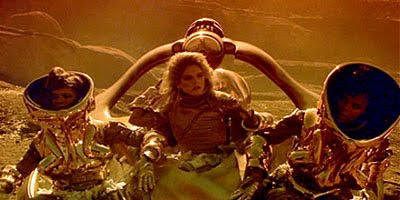 The plot of the film is simple: a luxury cruise ship explodes, and three beautiful female passengers just barely manage to escape fiery death in an escape pod. The pod crash lands on Terra IX, a failed colony world that has fallen to plague and civil war, and the girls are quickly captured by the minions of the planet's self-proclaimed ruler, the mutant Overdog. A star pilot named Wolff discovers that there's a reward for their rescue, so he heads for the barren planet, and in the course of attempting to save the women, he meets a young scavenger named Niki who agrees to be his guide. After clashes with nomadic scavengers, mutants and a rival bounty hunter named Washington, Wolff finally reaches Overdog's fortress where the grotesque tyrant is entertaining his subjects by forcing prisoners to run through a fiendish maze of death.... 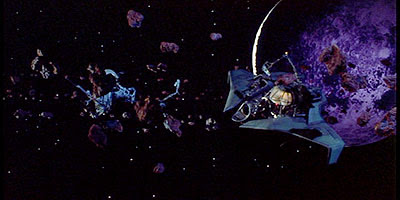 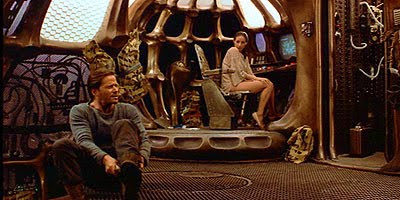 Spacehunter is - like pretty much all my favorite space operas - a Western with spaceships and blasters. The protagonist, Wolff (played to wry perfection by Peter Strauss) is, like Han Solo in the first Star Wars, a small-time, somewhat shady, independent ship's captain who is deeply in debt and desperate for a big score. Unlike the aforementioned Solo, though, Wolff's choice in traveling companions is more to my tastes - instead of a seven-foot tall walking carpet, he's got a shapely brunette engineer, who also happens to be an android sexbot . Her name's Chalmers (played by the lovely Andrea Marcovicci), and I'm always saddened when she's felled by a stray laser bolt early in the film.... 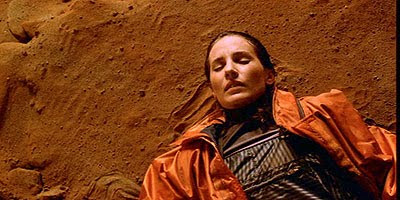 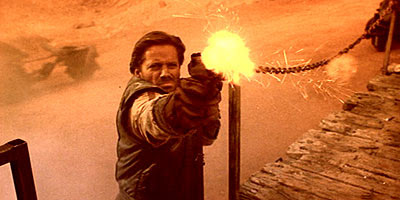 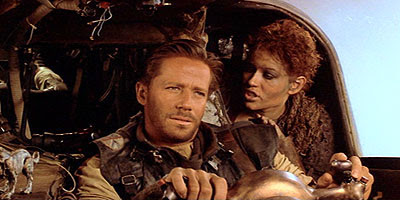 Like Star Wars' Solo, Wolff's very name tells us that he's a loner (if only slightly more subtly). A mercenary, he's got plenty of bravado and and he's quick with his blaster. He's clearly not good at relating to people (even his android finds him irritating) though, so when Niki comes along (and the pre-John Hughes Molly Ringwald's actually pretty endearing in the role when she's not being annoying) he is deliberately brusque and cold toward her. Although he eventually bonds with the teenage girl (and yeah, it is slightly creepy considering that Niki's a fairly nubile young thing) it takes literally to the very end of the film before he's willing to make her a permanent part of his life.

This is all very much in the tradition of the cinematic Western gunslinger. 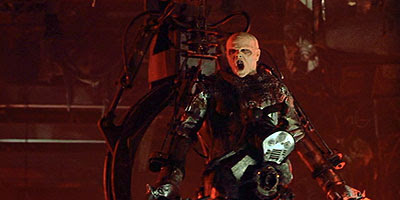 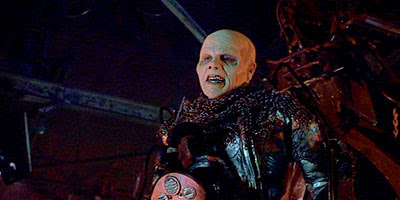 My biggest complaint with the film is that we're not given enough of Michael Ironside's Overdog. A good hero needs a good adversary, but Overdog doesn't quite measure up. Physically, he's a delightfully nasty creature - a mutated, deformed cyborg, stuck on the end of a crane and brandishing giant metal claws - but aside from a little bit of early expositional dialogue that identifies him as scientist who was once trying to cure the plague that ravaged the planet, we never get to know him or understand his motivations, if any. I suppose it's possible that his mind has simply devolved to the point where all he cares about are primal needs like sex and the thrills of bloodsports, but I never quite understood what power he held over the inhabitants of the planet that allowed him to rule them. Too bad, because Ironside is a marvelous actor who is especially adept at playing heavies with depth; unfortunately the script doesn't give him that opportunity. 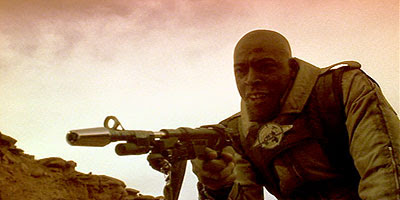 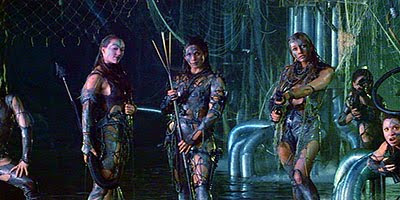 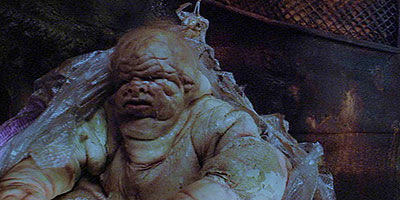 Wolff's journey - as all classical hero's journeys - has him encounter a number of interesting menaces, from aquatic amazons to grotesquely obese "bat men." Actually, according to an old Starlog magazine article, the design of these creatures - by Tom Burman's studio - was a mistake based on a typo. The story goes that because of the budget and production schedule, the make-up crew had to build the creatures without the direct supervision of the director or producer, and their mistyped copy of the script identified the mutants as "fat men" and not "bat men." The mistake went undiscovered until the pricey latex suits were delivered to the Utah location, and at that point there was no time or money to have them remade. 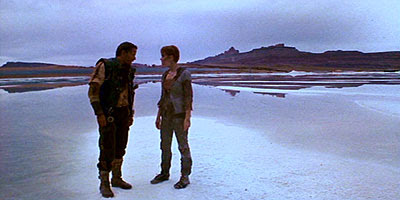 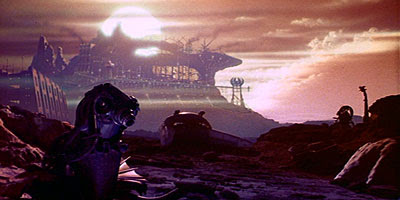 That gaffe aside, I actually really like the look of the film. A lot has been made of the film's Road Warrior-esque production design, but considering that the setting is an utterly failed colony world, I'm not sure how else the characters and their environs should have looked. Personally, it all works just fine for me, and from the glimpses we get of the technology beyond Terra IX - like the passenger starliner, Wolff's ship and his "tumbler" vehicle - there seems to be a pretty cool galactic civilization out there. Too bad there weren't any sequels to show us more of it. The Moab, Utah locations are decidedly otherworldly, and the cinematography by Frank Tidy presents those unearthly locations to fine effect.

Also playing into the "Western" nature of the story, Elmer Bernstein - who is probably best-known for his theme to the epic The Magnificent Seven - provides suitably "big" and heroic musical score for the film. 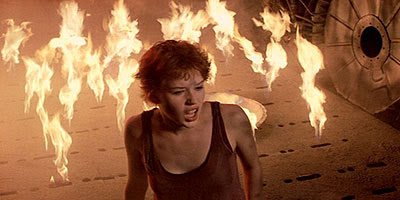 I recently re-watched the Columbia DVD released a decade or so ago, and it's a pretty basic catalog disc, with an adequate transfer from a somewhat worn print. The 2-D presentation is actually preferable to the theatrical 3-D version that I saw in '83 - that one wasn't projected properly and was badly out-of-focus, but no one could tell if it was wrong or just bad 3-D. I got up halfway through the film and went to complain to the manager. He rudely insisted that it looked the way it was supposed to, and that I didn't know what I was talking about. Pissed, I returned to my seat. A few minutes later, the movie snapped into focus and the rest of it played out properly. Never got an apology, though. (Yes, it still chafes my ass.)

The DVD presents the film in both 2.35:1 anamorphic widescreen, and, on the flip side, 1.33:1 pan & scan. There are no bonus features beyond some apparently randomly-selected trailers for other Columbia DVDs. 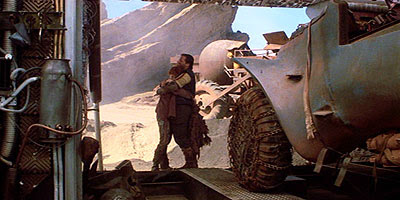 Anyway, if you haven't picked up on it, I like the movie a lot. I liked it in '83 (and my girlfriend did, too!) and I still like it now. I think Strauss and Ringwald both play their characters extremely well, and though Lamont Johnson's direction is rather by-the-numbers and lacks much stylistic flair, it's reasonably well-paced and fun. The action sequences are decent, the photography is good, and the "in-your-face" 3-D moments aren't too obtrusive.

Believe me, I'm not kidding when I say that I wish there had been a couple more Spacehunter adventures....
Posted by Christopher Mills at 12:00 AM