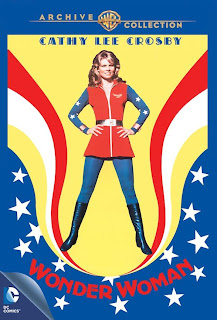 Not too long ago, I wrote about the 1974 Wonder Woman television movie/pilot that starred Cathy Lee Crosby as DC Comics' star-spangled Amazon princess from Paradise Island. At the time I actually mentioned that I thought it would make a good candidate for DVD release by Warner Brothers' manufacture-on-demand Warner Archive Collection.

Well, apparently, someone was listening.

On December 11th, Warner Archive will be releasing Wonder Woman on burned-to-order disc:

Before Lynda Carter took the heroine back to World War 2 for her “New, Original” incarnation in 1975, statuesque tennis pro-turned-performer Cathy Lee Crosby swung the magic lasso in a very different TV incarnation of Wonder Woman. As developed by scribe John D.F. Black (Star Trek), and seemingly influenced by her recent turn as a mod, cat-suited crime-fighter in the pages of her DC Comics home, this Amazon Princess was more superspy than superhero. Still, many of the expected wondrous elements from bracelets and lassos to Paradise Island and invisible jets all make an appearance, albeit with a sleek, seventies espionage super-action refit. Three years before taking up residence on Fantasy Island, Ricardo Montalban (Star Trek II: The wrath Of Khan) plays laconic lothario Abner Smith, who lurks at the top of the conspiracy to make off with ultra-secret code books – leading Agent Prince to discover an Amazon sister-in-exile (Anitra Ford).

Although not a 70s show, fans of superhero television may be interested to know that Warner Archive will be releasing the second season of the 80s syndicated Superboy series on the same day. (I happen to be a fan of that show, so I'm excited by this news, as well.)

Neither title appears to be available at the Warner Archive site as yet, but I'm sure they'll be listed shortly. Needless to say, I'll be trying to get my hands on a copy as soon as I can, and when I do, I'll post a full review here on the site.
Posted by Christopher Mills at 5:38 PM