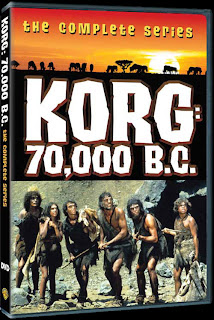 Not strictly sci-fi, but close enough for my blog, Korg: 70,000 B.C. was a 1974 live-action Saturday morning children's series revolving around the day-to-day struggle for survival of a family of  (English-speaking) Neanderthals.

Created by Fred Frieberger (producer of Star Trek Season 3 and Space: 1999 Year 2), the show was a rare foray into live-action by Hanna-Barbara and starred Jim Malinda as Korg.

A plaintive hunting horn, heard over a ruddy sunrise, signaled the start of something different on Saturday mornings in the mid-seventies. Clan Korg had arrived to take kids and kids at heart on a series of live-action anthropological adventures across the dangerous terrain of prehistory. Aided by consultants from both New York's American Museum of Natural History and the Natural History Museum of Los Angeles County, Korg ditched battling dinos and discovering fire for a more mature focus on the dawn of cooperation and compassion amongst our Neanderthal brethren as personified by it's pre-nuclear family. Korg is the patriarch of the clan, which includes Mara, his mate; Bok, Korg's younger brother; and Korg's three offspring: Tana, 15; Ree, 12; and Tar, 11. Together, they brave opposing tribes, cave bears and fire while discovering the roots of art, diplomacy and commerce in the world of 70,000 BC. Burgess Meredith narrates.

I'm not quite sure how I missed it, as I usually try to stay on top of releases from Warner Archive, but I guess they released the complete series of Korg earlier in December as a 2-disc Manufactured-On-Demand DVD set containing all 16 episodes.

I can't say I remember the show well; I rarely watched it, preferring the more fantastic primeval thrills of the Land of The Lost. But I do know that it had its fans among the era's Star Kids.

The discs can be ordered directly from Warner Archive or through Amazon: Korg: 70,000 B.C.

Posted by Christopher Mills at 11:20 AM