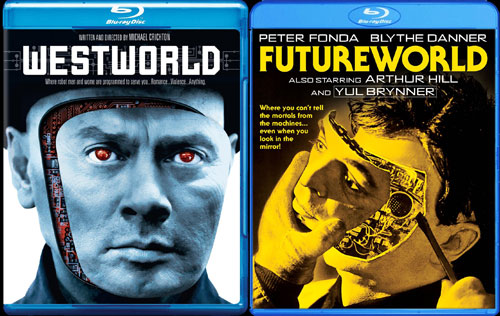 Here's some good news for those of us Star Kids who are equipped for HDTV: Warner Home Video will be releasing the 1973 Michael Chricton killer android thriller Westworld, starring James Brolin, Richard Benjamin (Quark) and the unstoppable Yul Brynner (The Ultimate Warrior), on Blu-ray disc in March of 2013.

And in a nice bit of marketing syncronicity, Shout Factory has licensed the rights to the 1976 American-International-produced, Richard T. Heffron-directed sequel, Futureworld, starring Peter Fonda and Blythe Danner (with a cameo by Brynner) and will also be releasing it on Blu in March!

I can't wait! Wouldn't it be extra-cool if Warner Archive would take this opportunity to unearth from the vaults and dust off the short-lived 1980 television series Beyond Westworld at the same time?

Both of these eagerly-anticipated Blu-ray discs are available for pre-order from Amazon:

Posted by Christopher Mills at 10:17 AM