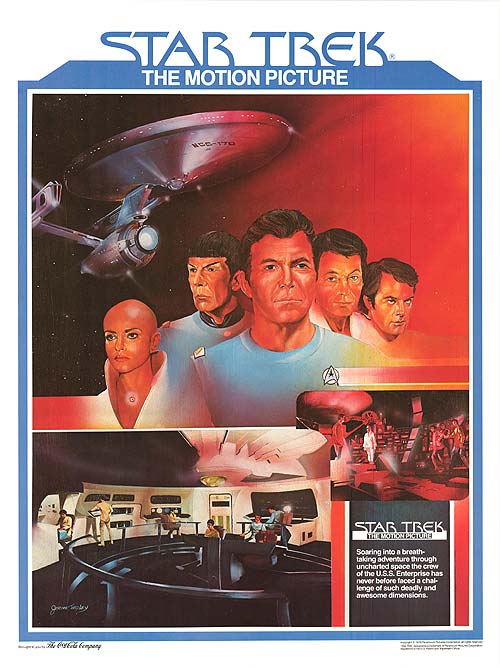 It only just occurred to me that it was 33 years ago today that the only new, live-action Star Trek of the 1970s premiered in U.S. cinemas. A glorious, big screen reunion of the original television crew in a then-unprecedented, big-budgeted theatrical feature film.

My own opinion of The Motion Picture has evolved over the years - from my initial awestruck experience 33 years ago, to my vague dissatisfaction with it during the 80s and pan & scan TV/VHS home viewings, to a more positive re-evaluation as both I and the film grew older. I still think The Wrath Of Khan is the best of the Trek films, but I really love this first widescreen adventure as well, and appreciate it much more now than I used to.

I honestly don't know much about this poster; I don't know the artist, nor exactly where/how it was available. I only know that it was some sort of premium offered by the Coca-Cola company. I'd welcome any information about its provenance - if you know something about it, post in the comments below.

ADDENDUM: According to a commenter below, this poster was actually an in-theater concession stand premium that you could acquire with the appropriate purchase of a Coca-Cola soft drink. Cool! Thanks!

Happy Anniversary, ST-TMP!
Posted by Christopher Mills at 2:38 AM